Top 6 Universities In the USA For Your Future Studies 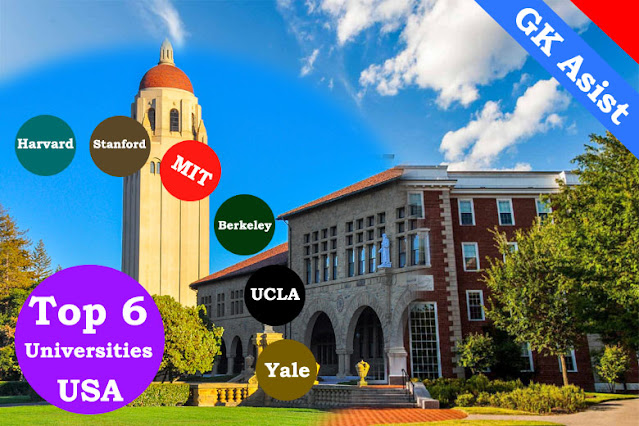 Harvard University is a very well-established and well-reputed private university, located in Cambridge, Massachusetts, United States. It was established in 1636. This is the oldest higher education institute. It is also known for its enormous library consisting of 18 million volumes and around 400 million manuscripts. It has about 20000 students, among which 5877 are international students.

The total number of faculties is 4646. It has a four-year full-time undergraduate program in which the students have to select their own subjects to meet their own academic ambitions. Application fees for the undergraduate program are 75 US dollars. This application includes essay-type answers, two teacher evaluations, a secondary school report, as well as two SAT subject reports, and an ACT test. The annual cost of undergraduate education is 73600 US dollars. Most of Harvard’s post-graduate degree programs function under Harvard’s GSAS which was formed in 1872.

It has MA, MSC, and Ph.D. in around 56 disciplines. There are approximately 4000 students in Harvard’s post-graduate program, where 200 are pursuing masters while the others in PhDs. The application process is relatively simple but varies from the choices of the subjects. The study costs around 110000 US dollars for four years.

Stanford University is also a private university and is among the top universities in the world, also nicknamed “the billionaire factory”. It is located in Stanford, about 30 miles from San Francisco and it is the center of the famous ‘silicon valley. The university was established in 1885 by senator Leland Stanford and his wife Jane. There are about 4700 faculty and about 12000 students amongst whom, there are about 4000 international students.

Stanford has a four-year full-time undergraduate program. Apart from the major subject, students are required to possess writing skills, language skills and two courses called ways of thinking and ways of doing. You can apply by the common or coalition application with recommendation letters from teachers, media transcript, school reports, SAT with an essay, or ACT with writing test. The application fee is 90 US dollars and the undergraduate tuition cost is 16901 US dollars per quarter.

MIT is a private institute with the motto of “mind and hand”. It was established in 1861 which was initially based on science and problem solving but today it has over 11000 students and about 3000 faculties among which 3700 are international students. The university is located in Massachusetts. Students can apply through the system known as ‘MyMIT’, online. The fee for the application is 75 US dollars.

The requirements for undergraduates are their biographical details, answers to short questions and essays and grades as well as recommendation letters, transcript and school profile. The native English speakers must submit their ACT or SAT scores as well as they have to take SAT tests in mathematics and science while nonnative English speakers have to appear for TOEFL and the two SET tests. The process ends with an interview. The fees are estimated to be around 67430 US dollars per year and 91 percent of the students claim to have financial aid.

At MIT, a master’s degree is usually finished within a year while an engineer’s degree requires two years. They are offered in most of the fields from aeronautics and engineering as well as media and urban studies. It has a world-renowned MBA course too. The application fee is 75 US dollars and the applicants also need to submit a resume, recommendation letters, statement of objectives, GRE scores, while international students have to submit TOEFL or IELTS scores. The fees vary as per the program but an estimate for the summer session is 16000 US dollars.

University of California (Berkeley), It’s a public university located in Berkeley, founded in 1868 by fourteen founding members of the Association of American Universities. The alumni faculty as well as doctorates include 99 Nobel laureates and 14 Pulitzer winners. It had started out only with 40 students. There are around 40000 students with over 9500 international students and 3700 faculty. The university has 6 colleges offering undergraduate programs

University of California (Los Angeles), It is a public university located in Los Angeles, The university was established in 1882 as the southern branch of the California State Normal School and in 1919, it became the southern branch of the University of California. It has 45742 students among them, 6140 are international students. There are a total of 4016 academic staff and 26139 administrative staff. The university provides 337 undergraduate and graduate degree programs among various disciplines.

The university consists of 7 professional schools, 4 special health science schools, and 6 undergraduate schools. International students applying for their first year in undergraduate courses are required to submit their SAT and ACT and ACT writing scores as well as their high school certificates. Non-native English speakers must submit their IELTS and TOEFL results. The university offers 40 courses for students applying for post-graduation. The fees vary from course to course.

Yale University is a private university, situated in New Haven, Connecticut. The university was founded in 1701 by English Puritans, which makes it the third-oldest higher education institute in the United States. The university consists of the original undergraduate college, the Yale Graduate School of Arts and Sciences, and 12 professional schools.

At undergraduate level, the university has 9420 students, among which 2537 are international students and 5391 faculties. There are 7357 postgraduate students.